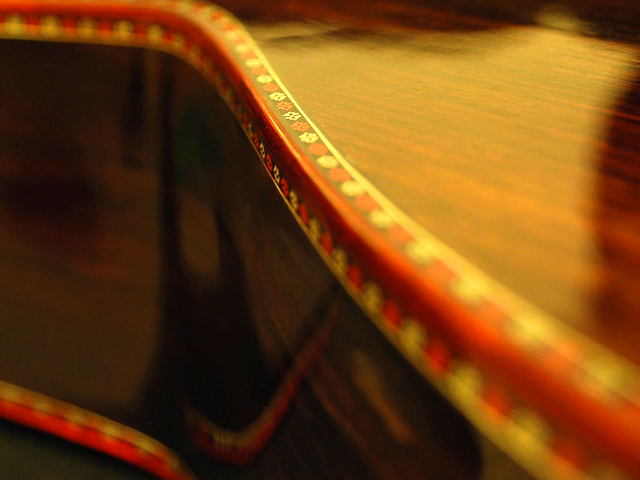 Mosaic and other types of decoration made on the basis of this technique consist of the smallest wood particles. A square centimeter of such one item may contain from 400 to 1.000 or more elements of different shades and structure assembled in a single stylized panel.

A wide range of exclusive, unique ornaments of different styles and directions of art can satisfy the tastes of even the most sophisticated luthiers and performers.

In his work Dmitry uses veneer made of only natural wood species growing in different parts of our planet. These species include Anegri, Sicamore, American walnut, American pear, Mahogany, Bubinga, Indian rosewood, etc. and also natural european maple dyed in various colors by means of through dyeing.

All material is carefully sorted, so only the best part of it is used in work, which in turn enhances the level of assembly and the ultimate quality of the mosaic

Dmitry uses such natural properties of wood as diverse light reflection depending on the direction of the fiber and the saw cut. This property allows Dmitry to place each mosaic pixel in a certain way so at different angles the item seems to come to life and acquires a characteristic volumetric 3D appearance.

This effect is enhanced when lacquer coating is applied to the mosaic surface. This makes a huge impression on professionals and also on those people who know little about this method and this direction of applied art.

Mosaic guitar rosettes and purfling made by Dmitry Zhevlakov can be seen on the instruments of various luthiers and the best guitarists of the world play these guitars. 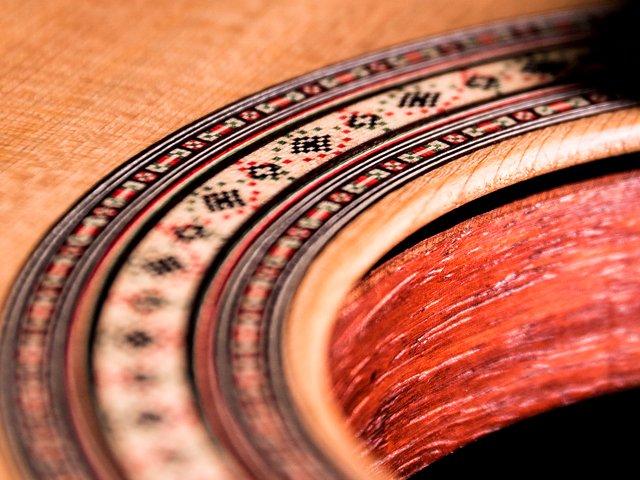 Articles and positive reviews about Dmitry Zhevlakov`s work and the innovative things he creates were published in such journals and web-sites as:

A number of world famous guitarists such as Gorge Morel (Argentina), Ana Vidovic (Croatia), George Caballeros (Brazil), George Benson (USA, New York), Ricardo Cobo (USA) and many others play the instruments created by the above- mentioned luthiers with Dmitry`s mosaic.

Dmitry has been a member of the Guild of American Luthiers since 2003.

His excellent skills and professionalism were highly appreciated at the International Exhibition "MUSIKMESSE" in Frankfurt, Germany, in 2009, as well as at the annual Convention of luthiers from various countries: "GAL CONVENTION", organized by the Guild of American Luthiers in Tacoma, Washington, United States. 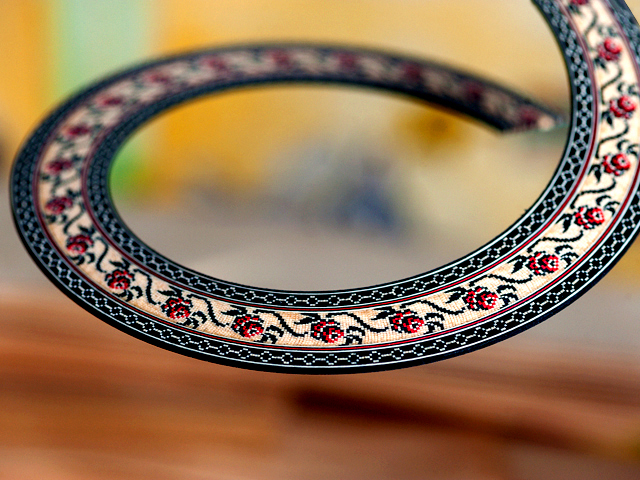 Dmitry was born in a family of luthiers. Both his father — Alexander Zhevlakov and his grandfather — Vasily Zhevlakov were engaged in this craft.

As a child Dmitry helped his father in building of classical guitars, adopting all necessary skills.

The numerous, unique inventions made by his father and grandfather include the technology of the so-called round frets, used on classical guitars.

This method allowed them to use solid rock metal, which increased the durability of the frets by many times. Subsequently, this method was used by some guitar makers from other countries. Dmitry also used round frets on his instruments.

From 1992 to 2007 Dmitry Zhevlakov was engaged in building of his own classical guitars. The prominent guitar virtuoso and composer Sergey Rudnev began to play the guitars made by Dmitry. Several experimental instruments with unique characteristics were made personally for him. You can see a photo of one of these instruments in Maestro's hands on the cover of the journal "GUITARIST" 2004\ issue. 1. In total Dmitry Zhevlakov crafted more than 40 classical guitars.

In 2006, Dmitry was the first person in Russia who built several instruments on the basis of the little-known then technology "Double top", using the so-called "honeycomb core". One of these instruments is in Scotland now and there is a lot of positive feedback from the performers.

In 1980 Dmitry’s father and grandfather created mosaic rosettes for guitars for the first time. Dmitry was engaged in creating of authorial ornaments and designs for guitar rosettes. During 40 years Dmitry improves and supports the technology of wooden mosaic, constantly raising the quality and skills.

The photos of various models of guitar rosettes made by D. Zhevlakov, as well as their description and specifications, can be found in the section of Rosettes 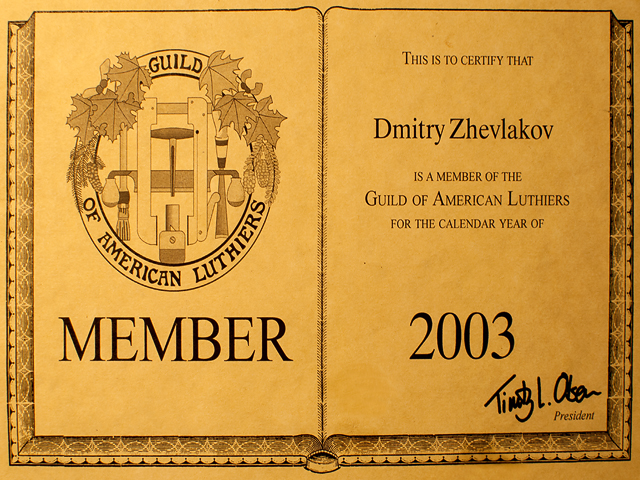